We welcome inquiries on any of our horses. 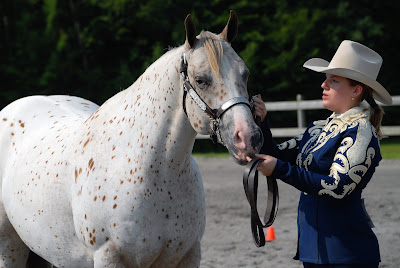 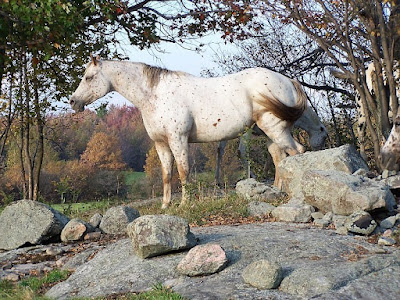 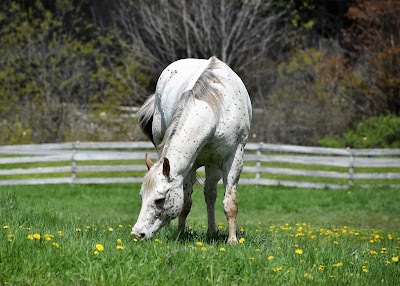 Chestnut-leopard.  16 hands. Foundation Pedigree Designation. Tall, muscle bound and colorful this mare carries the outstanding lines of James Bond, Goer, Princes MacDonald, Top Moon and Mighty Bright and is all Appaloosa for three generations!  Her name fits her well, a true leopard with small ruby-red spots through out her body make her a stand-out.  A show ring favorite, Ruby easily earned FIVE  ROM's! - Open Halter Mares, Non-Pro Halter Mares, Most Colorful, FPD Mares and Youth Halter with a total of 95 national points. She was consistently on the Leading the Nation list in multiple classes and in 2006 earned 2 Year-End Finalist Awards (Broodmares and FPD Mares)  We couldn't be more pleased! She has been a vivid color producer with every foal as big and as beautiful as she is. Ruby is not only a farm favorite with us but one for visitors as well. Best of all, she also consistently produces with a variety of stallions. Her production includes top Five World Show placings, and ROM earners and she has a daughter in Italy that is a European Champion. What more could we ask of this outstanding mare? A photograph of Ruby has been featured in the ApHC official calendar and the coffee table book Native Treasure. Sadly, we lost Ruby this year due to an aneurysm. 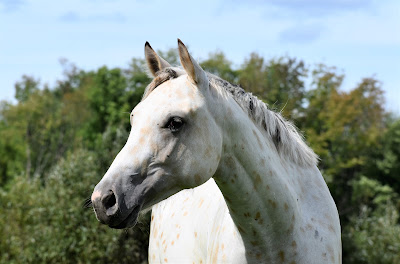 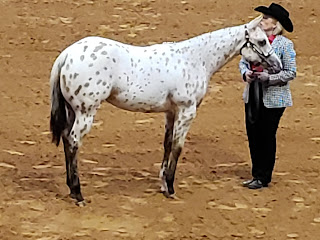 Iem Gloribee- (Glory) 2020
Top Five World Show
Futurity Winner
Pedigree
Bucksin-leopard.  This 2020 filly should mature to 16 hands. Tall, elegant, moderns with muscle this colorful this colorful yearling was sired by Iem The One (AQHA) and is out of our Smooth Crystal. She embodies the hybrid vigor of crossing the older Skipper W and Sheldak lines with the modern competitive lines in AQHA. The end result has so far been a Top Five World Show placing and winning the East Coast Halter Futurity. We look forward to this young fillies future production for our farm. 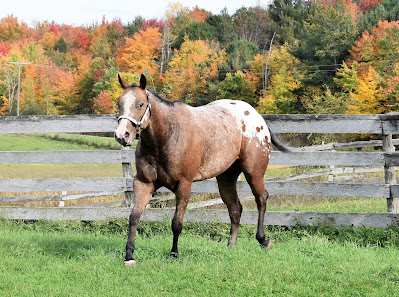 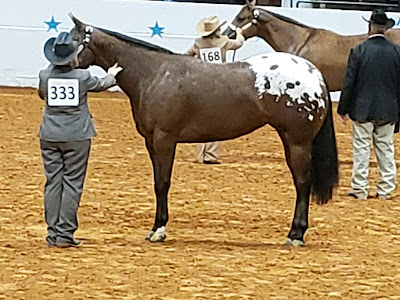 All That Iem- (Emily) 2019
Top Ten World Show
Futurity Winner
Pedigree
Bay Roan with Blanket.  This 2019 filly was an East Coast Halter Futurity winner and Top Ten at the World Show both as a weanling and yearling. It's hard not to notice the muscle on this colorful girl sired by Iem The One (AQHA) and is out of our Smooth Crystal. Again, the hybrid vigor of crossing the older Skipper W and Sheldak lines with the modern competitive lines in AQHA has proven successful for us. We look forward to this young fillies future production for our farm. 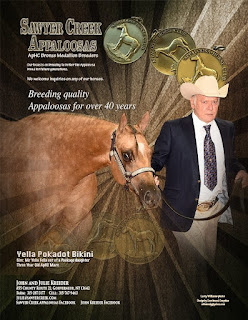 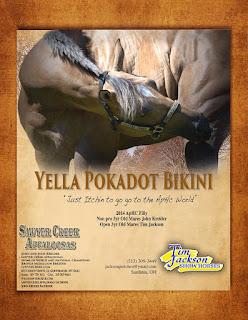 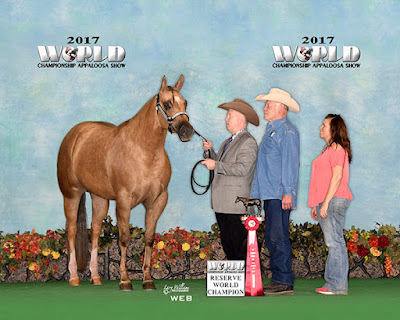 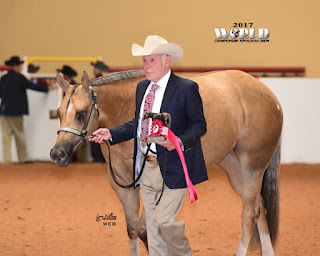 Yella Pokadot Bikini- (Bikini) 2014
Reserve World Champion
Pedigree
2014 ApHC palomino mare with spots over hips. 16 hands plus. Bikini is the only colored Appaloosa mare in existence that is sired by the immortal Mr Yella Fella (AQHA). Her dam is Pickadilly Lily, a multiple World and National Champion producer, full sister to Investment Package and dam to My Kinda Fella. Her sire, Mr Yella Fella, was a two time AQHA World Champion, two time PHBA World Champion, Superior at Halter with 173.5 points, Congress Champion and Reserve Champion. Even more importantly, he was a multiple World Champion and Congress Champion producer in 4 breed associations and consistent Leading Halter Sire. With only a couple of shows under her belt she has earned two ROM's in halter, and a Reserve World Championship. As you would expect, Bikini is big, correct and destined for continued success in our own breeding shed. Her first foal (a colored filly by Execute) was a multiple class money winner in the BHF and first time out, showing at a large ApHC show went grand champion under all judges. Bikini promises to be one of our super producers! 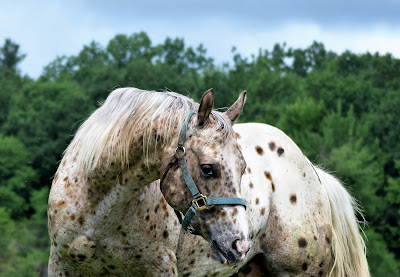 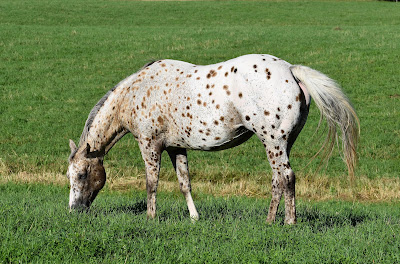 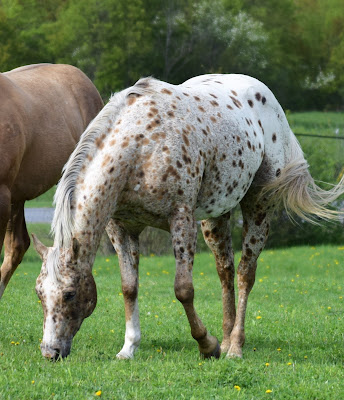 This pretty unusually patterned mare comes from the legendary Sheldak breeding program and is heavily Skipper bred. Her sire, Skipa Crystal, is by Crystal Prince and Cherry Benita by Mighty Tim. She carries some of the very best old line breeding the ApHC has to offer- and lines LOADED with leopards. Her AQHA dam, Shes Sucha Honey, was by Sucha Smoothie (World Champion producer) by Smoothtown (World Champion and Multiple World Champ producer.) The bottom side, Shes the Shortcake, goes back to some of the best of the Skipper W lines. Loaded with Skipper breeding. We think this mare makes a wonderful outcross with modern bred stallions with the added benefit of COLOR! So far, we have been proven correct with three outstanding and winning foals by Iem The One. SOLD! 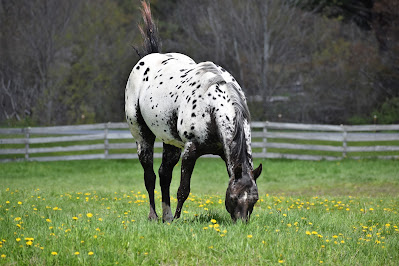 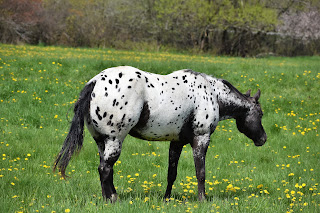 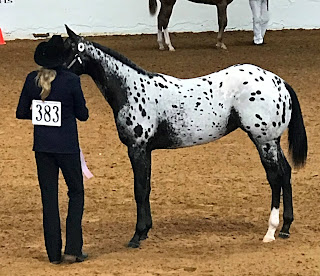 Black near-leopard 2017 filly.. Everyone LOVES Pebbles!  "Pebbles" is by the ApHC sire McClusion, the 2006 Reserve National Champion-Non Pro Stallion, #1 Non-Pro Stallion in the Nation as a Yearling, #2 Non-Pro Stallion in the Nation-2006. He has earned 229 Halter points in open halter, color, non pro halter
2006 Reserve National Non Pro Champion Stallion, 2006 Non Pro Superior Halter award, 2006 Top Ten in the Nation, 2007 Nationals he was in the Top Five in Open and Non Pro Color and Aged Stallions. Her dam, Shez Surreal, is by Surreal (ApHC World Champion Halter Stallion) and out of the AQHA mare Scent of a Candle, by Misters Tradition. Not only has this filly got a pedigree LOADED with World Champions and World Champion producers in both the AQHA and ApHC, but she has that color to die for. We look forward to her continued production in our breeding program.